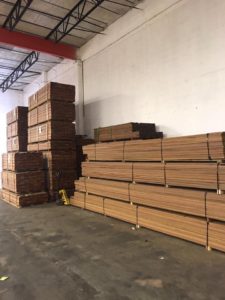 Being a direct manufacture and importer allows us to offer our premium wood at the great prices available.

Color/Appearance: Heartwood can vary in color from a reddish brown, to a more yellowish olive brown, to a dark blackish brown; sometimes with contrasting darker brown/black stripes. In certain species, there are powdery yellow deposits within the wood. Ipe can be difficult to distinguish visually from Cumaru, another dense South American timber, though Ipe tends to be darker, and lacks the subtle yet characteristic vanilla/cinnamon scent while being worked.
Grain/Texture: Has a fine to medium texture, with the grain varying from straight to irregular and/or interlocked.
Endgrain: Diffuse-porous; solitary and radial multiples; medium to large pores in no specific arrangement, moderately numerous to numerous; tyloses and mineral/gum deposits occasionally present; parenchyma vasicentric, winged, confluent, and marginal; narrow rays, spacing normal.
Rot Resistance: Ipe is among the most durable lumbers on earth, with exceptional resistance to decay, rot, and insect attack. Ipe was reportedly used for the boardwalk along the beach of New York City’s Coney Island, and was said to have lasted 25 years before it needed to be replaced: an amazing lifespan given the amount of traffic and environmental stresses put upon the wood.
Workability: Overall, Ipe is a difficult wood to work, being extremely hard and dense, with high cutting resistance during sawing. Ipe also has a pronounced blunting effect on cutting edges. The wood generally planes smoothly, but the grain can tearout on interlocked areas. Also, Ipe can be difficult to glue properly, and surface preparationprior to gluing is recommended. Straight-grained wood turns well, though the natural powdery yellow deposits can sometimes interfere with polishing or finishing the wood.